What is K2 Spice? 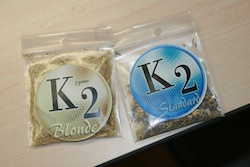 K2 Spice is one of more common names for synthetic cannabis, a psychoactive herbal and chemical product that mimic the effects of marijuana. Other names for it include Bliss, Genie, Black Mamba, Bombay Blue, Zohai, Skunk, Moon Rocks and Yucatan Fire.

Spice is usually comprised of a mixture of shredded plants, spices and herbs and then sprayed with artificial chemical compounds, none of which are guaranteed to be safe for human consumption. Spice looks a lot like potpourri.

Some types of synthetic cannabinoids remain legal. This is because it is a designer drug that is fairly new to the market. Spice benefits from particular loopholes in the legal system as a result. However, while it is still technically considered legal in the United States, specific chemicals found in Spice have been deemed illegal in some US states and many European countries in the last few years. As of March 1, 2011, five types of cannabinoids found in synthetic cannabis known as JWH-018, JWH-073, CP-47,497, JWH-200 and cannabicyclohexanol are now illegal in the US. These substances have been deemed extremely harmful and hazardous to public health and safety.

Spice is consumed in ways similar to marijuana and can be smoked in joints, bongs or pipes. It can also be made into a tea. As Spice is designed to mimic the effects of THC, it is not surprising that they also share similar short and long-term effects. Spice users may experience involuntary body movements, increased agitation, severe paranoia, increased blood pressure and heart rate, heart palpitations, delusions, hallucinations and dysphoria. In some instances, synthetic cannabis has caused temporary to prolonged psychosis and psychotic disorders amongst users.

While synthetic cannabis products do not produce positive results with drug tests for THC, it is still possible to detect its metabolites in a urine sample.